Very Special Opening/A Christmas Plotz/Little Drummer Warners is the 49th episode of the original Animaniacs and the show's first Christmas special. It originally aired on December 6, 1993.

Each segment in the episode was animated by Tokyo Movie Shinsha, Ltd..

Slappy: Why don't you lighten up?!
Plotz: A horrible old squirrel! What are you doing here?
Slappy: That's what I'd like to know! The studio keeps givin' me these stupid cameos! (gets out her script and reading glasses) All right, hang on. I gotta coupla lines here. (clears throat) "Tonight, you will be visited by three ghosts."
Plotz: Why?
(beat as Slappy looks at her script)
Slappy: I dunno. I lost the other page. Can you believe I'm doing this for scale? Hey! Where's my four hundred and sixty-four dollars?! I gotta get a new agent.

Yakko: Helloooo, nurses! Say, why don't you come over to the water tower and look at my stamp collection?
Showgirl: But, Yakko, you don't have a stamp collection.
Yakko: Well, then, you can open my mail. 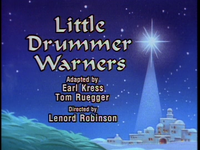 The Warners act out the nativity story to the tunes of "Silent Night", "We Three Kings", "O Little Town of Bethlehem", "Away in a Manger" and "The Little Drummer Boy".

The Warners act as shepherds, where they come upon the manger where Baby Jesus was born with Mary and Joseph. When the Three Wise Men give the Newborn King gifts, the Warners realize they have no gift. In lieu of a gift, Wakko asks to play on his drum, to which Mary agrees. The Warners then launch into a wild jazz rendition of "Little Drummer Boy," which pleases Mary and Joseph. Baby Jesus awakens, smiling at the Warners as the segment ends.