The Warners escape from the water tower via a hot air balloon. 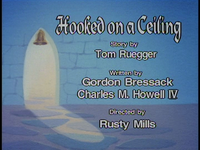 Michelangelo fires all of his workers while painting the ceiling of the Sistine Chapel, but realizes he has no workers, and the pope is coming by to see the finished ceiling soon. So he hires the Warners, who paint over the various pictures due to their disgust over naked people. However, when Michelangelo claims that they're supposed to paint naked people, the Warners agree (because they like painting naked people). However, the end results displease Michelangelo, but the Pope, who is revealed to be Steven Spielberg, is impressed by the paintings that resemble his movies.

The Warners are about to watch the next cartoon in a movie theater. 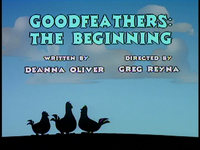 Squit dreams of being a Goodfeather, like Pesto and Bobby, but the two don't think he has what it takes. However, the Godpigeon agrees to let him be a Goodfeather if he gets him some food, so the trio of pigeons try to get a bagel that landed in the middle of the street. However, all of their attempts usually end with them getting injured in some way. In the end, the Godpigeon ends up getting the bagel himself with ease, and Squit becomes a Goodfeather.

Wakko is confused and wants to learn the moral of the story.

The moral of today's show is:
"Never ask what hot dogs are made of."

Retrieved from "https://animaniacs.fandom.com/wiki/Episode_4:_Hooked_on_a_Ceiling/Goodfeathers:_The_Beginning?oldid=31274"
Community content is available under CC-BY-SA unless otherwise noted.