Bun Control/Ex Mousina/Bloopf is the fourth episode of the Animaniacs reboot.

The Warners fight a rabbit infestation caused by a deranged farmer. Brain’s robot "son" turns on him. A new app is born. [1]

A farmer named Dwayne Lapistol arrives at the Water Tower who moved in next door, is selling bunnies. Dwayne goes to the water tower and tries to show Yakko his buns, but Yakko thinks he is talking about his butt and says "Good night, everybody" and closes the door. Dwayne Lapistol tells Yakko he is not talking about those buns and shows him the buns he was talking about. Wakko and Dot love the bunnies and buy two. The next morning, the bunnies have multiplied. The Warners' tower has been infested, including the whole studio. Yakko tries to return the bunnies to Dwayne, but he refuses saying that people with lots of bunnies are better people. Instead, they go to the CEO Nora Rita Norita to report the problem. Nora says she wants the bunnies kept in the studio, Suddenly. the water tower explodes, filled with bunnies. The Warners get very angry and the show changes into anime battle. Dwayne battles the Warners, and wins with the help of gigantic bunnies. The show changes back to a normal form, and Wakko decides to call the dingos for help. The dingos take all the bunnies and sell them to people while Dwayne is bagged and put in a truck. 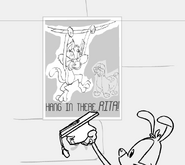 Brain is working on a new invention to take over the world and Pinky is very curious to see what it is. Brain presents it as the Binary Rodent Artificially Intelligent Nanotechnology, or B.R.A.I.N. for short. Brain decides to have B.R.A.I.N. as his son, so he can help with his evil plans to take over the world. After Brain sings a song about bonding with B.R.A.I.N. (Bonding), he proposes his plan. B.R.A.I.N. says that it will not work, and it does not make sense. Brain tries other ideas, but B.R.A.I.N. suggests his own plan, which includes destroying both Pinky and Brain. B.R.A.I.N. grows into a cybernetic abomination and asks them for any last words. Pinky asks a stupid question which makes B.R.A.I.N.'s system explode because of an error. After he explodes, Pinky and Brain clean up the spare parts and Brain says that tomorrow night they will try to take over the world again.

The Warners are hosting a convention for an app named Bloopf, which contains 1/10 of a second video. After showing the top 10, Bloopf is acquired by an app named Spooder, which has blinding lights and sounds that only dogs can hear.