The second Christmas episode of Animaniacs.

Slippin' on the Ice

The Warners sing a parody of Singin' in the Rain.

Snow and sleigh bells are added to every frame of the theme song.

Twas the Day Before Christmas 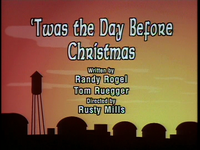 Told to Skippy by Slappy, the cast of Animaniacs star in their interpretation of the Clement Moore poem "A Visit from St. Nicholas".

Bad Idea: Singing Christmas carols to your neighbors
on the Fourth of July. 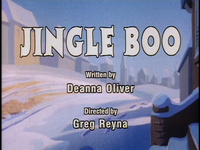 Chicken Boo works as Santa Claus for a department store that gives out a requested toy by a conveyer belt. However, Colin (aka the Randy Beaman kid) knows that Santa is really a giant chicken, to which the manager chalks up as a kid's odd fear and points out that Chicken Boo is the best Santa they have ever had. In true fashion, an accident with the conveyer belt rips off Chicken Boo's costume. An enraged manager remarks that "maybe they let chickens work as Santa in Arkansas, but not in the big city", and promptly kicks Chicken Boo into the sky. The real Santa saves the day by swooping down to rescue him and gives Chicken Boo a happy ending by giving him a ride in his sleigh.

The Great Wakkorotti: The Holiday Concert 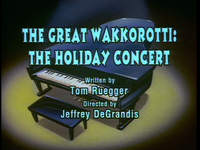 The Great Wakkorotti returns to belch his way through "Jingle Bells". 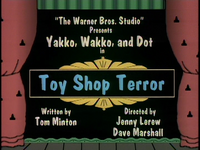 To the music of Raymond Scott's "Powerhouse", the Warners run amok in a toy shop.

A repeat of the classic song from episode 3 because of its wintry setting.

Retrieved from "https://animaniacs.fandom.com/wiki/Episode_50:_Twas_the_Day_Before_Christmas/Jingle_Boo/The_Great_Wakkorotti:_The_Holiday_Concert/Toy_Shop_Terror/Yakko%27s_Universe?oldid=29983"
Community content is available under CC-BY-SA unless otherwise noted.