Slappy and Skippy act as the spokessquirells for Branimaniacs, the official cereal of Animaniacs. It makes you have to go to the bathroom (due to its large amount of fiber), but you get paid for saying you like the cereal.

The Warners and the Beanstalk 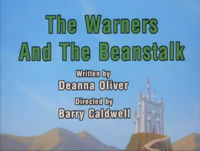 The Warners star in their version of the classic fairy tale with Hello Nurse as the harp and Ralph T. Guard as the giant. At one point in the story, the Warners convince the giant to eat gold eggs and meat instead of them, in the style of Dr. Seuss' Green Eggs and Ham.

Ralph: Fe fi fo fum / I fall down and hurt my bum. 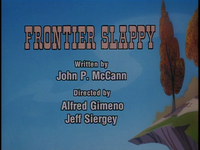 Slappy finds herself facing pioneer Daniel Boone, who wants to cut down her tree to build his house.

Slappy: It's ovah! Go away!

Retrieved from "https://animaniacs.fandom.com/wiki/Episode_51:_Branimaniacs/The_Warners_and_the_Beanstalk/Frontier_Slappy?oldid=30079"
Community content is available under CC-BY-SA unless otherwise noted.