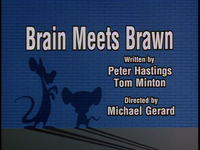 The Brain steals Dr. Jekyll's strength-enhancing formula which changes him into a terrifying monster when angered. He plots to disable the Big Ben at tea time to permanently suspend tea time in order to take over the world.

This episode is a reference to Dr. Jekyll and Mr. Hyde

Pinky: "Look, the cloud looks like a big pomegranate!"

Brain: "Pinky, are you pondering what I'm pondering?"

Pinky: "I think so, Brain, but if they called them Sad Meals, kids wouldn't buy them!"

Brain: "Hello in there, Pinky!"

Pinky: "Dislodge the pallet..." [Runs up and pulls at the wrong part]

Brain: "Exactly, Pinky. As they say in rustic circles, bottoms up!"

Brain: "We stop the clock, we stop the world! YES!"

Pinky: "Egad, Brain, brilliant! Wait, no, no...you'd have to be a hulking muscular giant to stop that clock, Brain!"

Brain: "Yes, if only I could find a way to use that savage strength..."

Pinky: "Is it working, Brain? Any changes? You tingling? Itching, feeling anything? Do you, do you, do you?"

Brain: (irate) "Quiet, Pinky! You're angering me! Now, please..." [all of a sudden, The Brain is experience tingling and discomfort whilst Pinky backs away]

[Pinky backs up into the corner, watching Brain grow in size, gaining muscle] 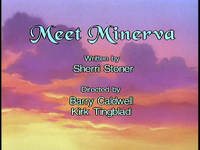 Minerva Mink, causes all species of the male gender to do Tex Avery-style wild takes whenever they see her. In this cartoon, she attempts to avoid a hunting dog named Newt, who either wants to capture her or have her.

Minerva: "Like I said, It's Not Pretty Being Me"

In the winter time, Colin, who is all bundled up, talks about Randy Beaman and his father picking up a female hitchhiker in Kansas and the ending is....kinda spooky. After he tells the story, Colin attempts to walk back to the door, but ends up landing in the snow on his side.

Retrieved from "https://animaniacs.fandom.com/wiki/Episode_54:_Brain_Meets_Brawn/Meet_Minerva?oldid=34883"
Community content is available under CC-BY-SA unless otherwise noted.