Yakko, Wakko and Dot: "How urbane-y!"

These cartoons have a gold theme to them. 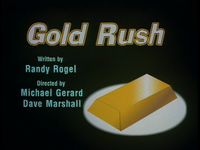 The Warners take revenge on a prospector who steals their entire wealth during the 1840s gold rush in California.

The Warners, followed by Ralph, run past the psychiatry and approach a mailbox. The Warners get inside it, and when Ralph opens it, an elephant comes out of it.

For unknown reasons, this segment is cut on the DVD.

A Gift of Gold 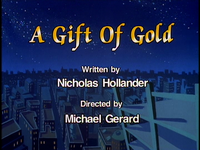 A heartwarming tale about a gold wrapping paper. Contains cameos by Mindy, Buttons, and Mindy's Father. 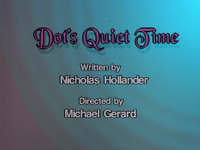 Dot attempts to find someplace quiet where she can read her book.

This parodies The Waltons.