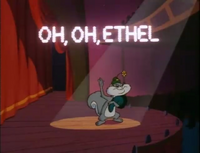 An advertisement for a new one-woman show starring Slappy Squirrel called "Oh, Oh, Ethel" is shown. However, Slappy becomes discouraged when she finds out the show is a tribute to Ethel Merman and not Ethel Mertz like she originally thought.

Yakko is in a session with Dr. Scratchansniff. Scratchy shows Yakko some ink blot tests but all Yakko sees is girls. This is the second time the show got away with saying "sexy". However, the fourth test reminds him of the next cartoon. 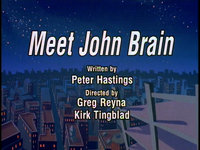 Pinky and the Brain play the political game when Brain runs for President of the United States. 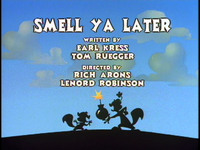 Slappy and Skippy face off against Stinkbomb the dog and his grandson Bumpo to get some nuts. 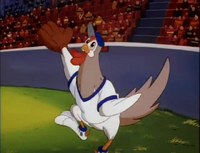 Chicken Boo stars in a parody of Nike sneakers ads.

The moral of today's story is:
"Do not back up. Severe tire damage."
Both Wakko and Dot think the wheel is broken.

Retrieved from "https://animaniacs.fandom.com/wiki/Episode_58:_Meet_John_Brain/Smell_Ya_Later?oldid=29600"
Community content is available under CC-BY-SA unless otherwise noted.