The Warners escape the water tower on a giant condor. 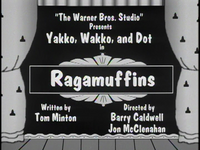 An early Warners film from 1929 is shown where the siblings disguise themselves as pastry chefs to get their hands on some food. 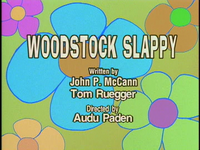 In 1969, Slappy and Skippy go out to Woodstock, NY, to get some rest, but find themselves in the middle of the biggest music and arts festival ever assembled. Features the "Who's on Stage" routine, patterned after the classic Abbott & Costello routine "Who's on First". 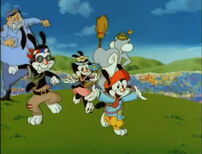 The Warners return to the water tower via a lasso from Wakko's gag bag. When Ralph pulls the rope, a horse falls on him. The Warners just shrug and go back into the tower.

Retrieved from "https://animaniacs.fandom.com/wiki/Episode_59:_Ragamuffins/Woodstock_Slappy?oldid=33697"
Community content is available under CC-BY-SA unless otherwise noted.