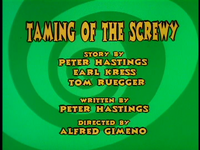 Dr. Scratchansniff has to teach the Warners good manners for a party. However, this is a task easier said than done. When the Warners do learn good manners, they are kicked out of the party by Mr. Plotz, who wants to impress two Japanese producers. In the end, it is the Warners who host the great party.

Dr. Scratchansniff: (demonstrating polite etiquette with Hello Nurse) How do you do? Now, Yakko, you try.
Yakko: How do you do...that thing with your mouth?

Jack Palance: Hey, Slappy, did you ever see this? (does a one-armed pushup like he did at the Oscars)
Slappy: Save it for the Jack LaLanne story, bubele! (to Luke Perry) Y'know, you remind me of a very mature Jonny Quest.

Tanaka: Mr. Kato would like to know who is responsible for this.
Plotz: It was them! It was them! I had nothing to do with it! Don't look at me!
Mr. Kato: Great party!
Other Japanese investor: Great party!
(both men laugh, then stop when Plotz begins to laughs)
Plotz: Great party? Hehehe, yes, uh, great party... ehehehe.

Retrieved from "https://animaniacs.fandom.com/wiki/Episode_5:_Taming_of_the_Screwy?oldid=42273"
Community content is available under CC-BY-SA unless otherwise noted.