This is Animaniacs' third Halloween episode. However, it aired on May 3, 1994.

Colin holds a live frog and talks about
Randy Beaman's encounter with Dracula.

Yakko: Andromeda Strainy...
NOTE: The scene in Taming of the Screwy where Yakko, Wakko, and Dot dance on the table replaces the
Bill Clinton scene. The Bill Clinton line is still used, though. 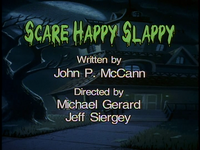 Slappy and Skippy, the latter of whom is dressed as Buster Bunny, go trick-or-treating at Slappy's arch-nemeses, Walter Wolf, Sid the Squid, and Beanie the Brain-Dead Bison.

Colin plays with a yo-yo and talks of
Randy Beaman's mom's best friend getting a tan. 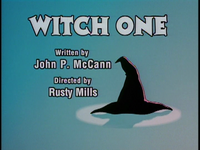 Rita and Runt find themselves in Salem, Massachusetts during the Salem Witch Trials, where Rita is accused of being a witch. All the songs in this cartoon are parodies of songs from the 1991 Disney film Beauty and the Beast.

Colin tells a rather scary story about
Randy Beaman hearing a scratching noise in his sleep. 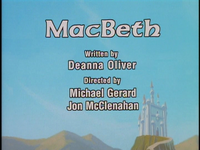 Dot, Hello Nurse and Slappy act out the witches' scene from Ma—I mean the Scottish Play, while Yakko "translates" the incantation. What they conjure up is...rather scary....FroynLAYven!

Retrieved from "https://animaniacs.fandom.com/wiki/Episode_62:_Scare_Happy_Slappy/Witch_One/MacBeth?oldid=29605"
Community content is available under CC-BY-SA unless otherwise noted.