This is the only episode in which the Warner siblings do not appear at all (outside of the opening sequence).

With Three You Get Eggroll 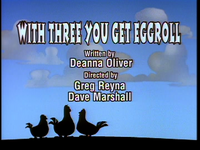 Pesto eggsits his sister's egg, but it rolls all over town. At one point near the end of the cartoon, Pesto's sister acts like Pesto, and Pesto acts like Squit. 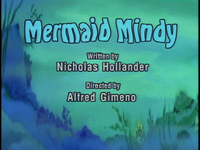 Mindy and her family are merfolk who live under the sea. Mindy chases a jellyfish and it is up to her dogfish Buttons to protect her. 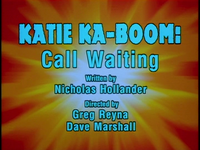 Katie Ka-Boom's dad forgets to take a message from one of her friends, and all heck breaks loose.

Retrieved from "https://animaniacs.fandom.com/wiki/Episode_63:_With_Three_You_Get_Eggroll/Mermaid_Mindy/Katie_Ka-Boom:_Call_Waiting?oldid=33415"
Community content is available under CC-BY-SA unless otherwise noted.