Colin tells a story about the time Randy Beaman ate a baloney sandwich.

Dot does a quick Fortune Teller
thing as part of the song. 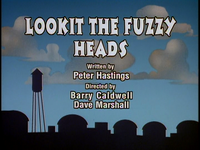 Dr. Scratchansniff suggests to the Warners to have another one of his patients sit in on their session. Unfortunately, that patient is the female menace of Tiny Toon Adventures, ELMYRA!!!!!!! She chases the siblings all throughout the studio, until Yakko gets an idea. They trick Elmyra into chasing Mindy, thereby going through the same pain Buttons goes through, and saving the pooch the hassle of going after the little girl. 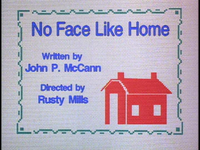 Slappy decides to get an extreme makeover to prepare for her cartoon comeback. Walter Wolf, however, decides to sabotage her plastic surgery.

Slappy: I'm gonna transform into a butterfly, or Wilford Brimley, whichever comes out of a cocoon.

Dot recites her interpretation of
"Beans Beans, the Musical Fruit".

The moral of today's story is: "Lather, rinse, repeat."

This was the best they could do in such short notice.

Retrieved from "https://animaniacs.fandom.com/wiki/Episode_64:_Lookit_the_Fuzzy_Heads/No_Face_Like_Home?oldid=32456"
Community content is available under CC-BY-SA unless otherwise noted.