Animaniacs Wiki
Register
Don't have an account?
Sign In
Advertisement
in: Pages with inline Wikipedia links, Parodies, Pinky and the Brain (1995) Episodes, Crossovers

Nympholepsy- To have a desire for an unattainable idea

Star Warners is the 65th and final episode of the Pinky and the Brain spin-off series. It was originally aired on November 14, 1998, under The Ultimate Animaniacs Super Special with episode 99 of Animaniacs.

What would happen if Star Wars and Animaniacs were put in a blender? The final Pinky and the Brain episode, Star Warners is the answer. The episode, which includes many of the Animaniacs cast is a Star Wars parody of A New Hope, Empire Strikes Back, and Return of the Jedi with Pinky and the Brain (as 3-PinkEO and Brain2-Me2) planning to use the Mega Star for their galactic domination plans. Along the way, the two become entangled in an adventure to save Princess Dot from the menacing Girth Plotz, who schemes to use the Mega Star for his own nefarious purposes.

Script of the episode signed by most of the cast and crew, courtesy of series creator Tom Ruegger's "Cartoonatics" Blog 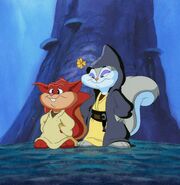