Episode 66 is the season premiere of Season 2 of Animaniacs­.

Dot recites her interpretation of
"I'm a Little Teapot".

Starting with this episode, the line "While Bill Clinton plays the sax" is replaced by "We've got wisecracks by the stacks" and a shot of the Warners singing and dancing on a table from "Taming of the Screwy".

A shortened version of the Warners' plane chase. 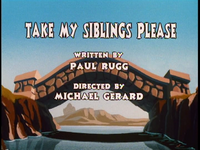 The Warners star in their version of "The Three Billy Goats Gruff".

Dot recites her interpretation of
"Roses are Red". 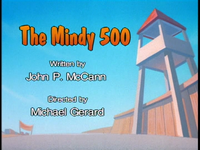 Mindy finds herself in the Indianapolis 500, and Buttons, somehow becomes tired, literally. 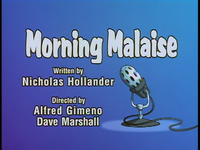 The Warners find themselves at odds with talk radio host Howie Turn and his sidekick Robin.

Dot recites
"The Poem That I Wrote",
but gets booed by the audience and the American viewing public.

The moral of today's story is:
"Don't be a fool, stay in school."

Announcer: Hey, Warner Brothers and the Warner Sister, you just completed another great show! What're you gonna do now?

Retrieved from "https://animaniacs.fandom.com/wiki/Episode_66:_Take_My_Siblings,_Please/The_Mindy_500/Morning_Malaise?oldid=29611"
Community content is available under CC-BY-SA unless otherwise noted.