In this episode, we proudly present two Goodfeathers cartoons. Both cartoon in the episode title were animated by Akom Film Production

Colin talks about the time Randy Beaman's sister made a face and it froze. 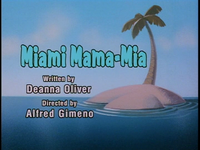 Pesto's mother is about to remarry, but Pesto does not want a new stepfather.

The Mime gets beat up by three strangers and stripped of all his clothes.

Then he steps on something sharp and hops around in pain. This is one of the only times the Mime is ever given a voice.

Pigeon on the Roof 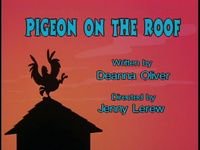 The Goodfeathers and Girlfeathers star in a parody of Fiddler on the Roof.

Pesto did not like the last cartoon, but Bobby sings him a song that parodies "Cool" from West Side Story.

Colin is once again out of the bathtub and has a towel wrapped around him. He talks about the time Randy Beaman's Uncle Roy blew his nose.

Apparently the show was too short, so we get several Good Idea, Bad Ideas in a row.

Bad Idea: Giving a small child a bunch of balloons.

Good Idea: Taking up a new hobby like bird calling.

Bad Idea: Taking up a new hobby like buffalo calling.

Bad Idea: Ordering a chili dog that makes you go.

The moral of today's story is: "People who live in glass houses should get dressed with the lights out."

Retrieved from "https://animaniacs.fandom.com/wiki/Episode_68:_Miami_Mama-Mia/Pigeon_on_the_Roof?oldid=33983"
Community content is available under CC-BY-SA unless otherwise noted.