Animaniacs Wiki
Register
Don't have an account?
Sign In
Advertisement
in: Pages with inline Wikipedia links, Episodes, Yakko, Wakko, and Dot,
and 7 more

"Flipper Parody/Temporary Insanity/Operation: Lollipop/What are We?" is the 6th episode of the original Animaniacs. It originally aired on September 20th, 1993.

The Warners do a parody of the opening to the television show Flipper as Ralph pursues them. 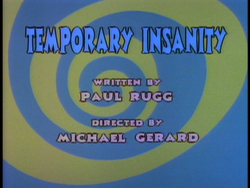 Mr. Plotz's secretary gets sick and leaves him with a phone number to dial a temp-secretary, but because of his lack of knowledge on how telephones work he accidentally dials the Warners, having them come over and "help" Mr. Plotz out. In the end they destroy the building over a dispute on who answers the phone, the call itself being the secretary letting Mr. Plotz know that she'll be sick for another day.

Plotz: (after hanging up on the Warners) Oh my. What have I done? Where's my aspirin? (opens his cabinet drawer)
(Yakko, Wakko and Dot appear out of the drawer)
Yakko: Reporting for work, sir!
(Yakko, Wakko and Dot kiss Mr. Plotz, and start cleaning and organizing his office)
Plotz: Get back in your tower!
Wakko: I thought you needed us to be your secretaries.
Plotz: Never!
(Wakko swallows Plotz's WB shield-shaped paperweight)
Plotz: And give me back my paperweight!
Wakko: Okay, but you'll have to wait a while.
Yakko: Mwah! Goodnight everybody!
Plotz: Ewwww!

Mr. Plotz: I want you to take a letter.
Wakko: Where do you want me to take it?
Mr. Plotz: No, no. I mean I want you to write a letter.
Wakko: Okay. (takes out a notepad and a pencil as Oh Christmas Tree plays in the background) Dear Santa, I have been ever so good this year. I would like a new mallet and a shiny brass anvil.
Mr. Plotz: No, no, no, no! Write a letter for me! For me!
Wakko: Well, I don't know what you want for Christmas.
(The phone rings.)
THE WB KIDS: I'll get it!
WAKKO: Look, it's a big fat fanny!

Plotz: Stop!
Yakko: Time out!
Plotz: When will this insanity end?
Dot: When one of us answers the phone, silly.
Plotz: I did not know that.
Yakko: Time in! 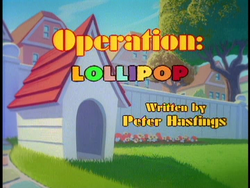 Mindy's mom (whom she refers to as "Lady" which irritates the mom) straps Mindy to her safety harness and gives her a lollipop and tells Buttons that he won't get a treat unless he's good, and specifically not to terrorize the mailman. Mindy then proceeds to accidentally get the now sticky lollipop onto the mailman's van, causing her to escape her safety harness to get it. Buttons then proceeds to chase Mindy to get her back home. They end up on a falling out of an airplane gliding back home with a mail back, Mindy somehow getting back into her safety harness with the lollipop just in time for the mother to check up on them. Mindy's mom assumes that Buttons attacked the mail man because of all the mail scattered around, scolding him and not giving him his treat.

As Dr. Scratchansniff tries to de-zanitize the WB Kids, he asks them what kind of creature they are. They then proceed to sing their ideas to him, but in the end they draw the conclusion that they are cute! Dr. Scratchansniff then says he regrets his decision to ask as they iris out.