Episode 6 (Reboot): The Cutening/Close Encounters of the Worst Kind/Equal Time

"Episode 6 (Reboot): The Cutening/Close Encounters of the Worst Kind/Equal Time"

The Cutening/Close Encounters of the Worst Kind/Equal Time is the sixth episode of the Animaniacs reboot.

Dot wakes up to a horrible, ugly morning, and is disgusted by her brothers. Dot gets out a strange, cute, sentinent cupcake and eats it to make herself look really cute. Dot becomes a kawaii style of cartoon and decides to do it on her brothers as well. Dot decides to use her cute powers on the whole world, and it becomes a whole new cute cartoon (The Cutening). Four weeks later, the Warners have become insane, and can't stop singing. Dot notices a gross pigeon and wonders if they do gross things, they'll change back. The Warners decide to lick the pigeon and vomit, changing the world back to normal, except for the Warners being half-pigeon.

Close Encounters of the Worst Kind

Brain makes a recording to contact with aliens asking them to take over the world and allow him to rule it. At the end of the recording, it changes to Pinky singing "Limbs Fall Off". Brain is angry that Pinky taped over his message, and contacts the aliens quickly so he can meet them in the woods. Once the aliens arrive they greet Brain happily, their names being Gabriella and an other alien. Brain wants them to take over the world, starting with the mall. At the mall, instead of wrecking havoc, all they do is eat food and sing karaoke with Pinky, particularly the song "I Wanna Dance". Brain takes Pinky out of the karaoke center and goes to the spaceship and tries to go to the planet in search of others who share his goals. The spaceship crashes, and scientists take Pinky and Brain thinking that they are the aliens. They are taken in by the government and experimented by them. Pinky notices that Gabriella is singing on TV, while Brain plots his next scheme to take over the world. 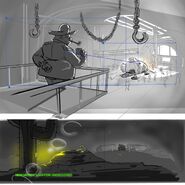 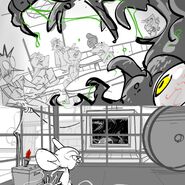 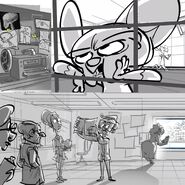 The Warners are hosting the 2020 elections, with Dot reporting from Iowa, which is boring, and Wakko with the electoral map, who tries to sing "Wakko's America" to spice things up, but it's the same. The Warners decide that they should show other electoral candidates' ads for what they'll do, because the main ones are too boring. One ad is if Jean Gravy is elected president, she will make all private pools public. If Ed Ortiz is elected president, he will jump out at people, and say his ideas. Another party ad is about to play, but is hacked by a Russian party trying to run for president in America, the candidate being Johnny Thanksgiving, a robot. Yakko knows that it's not the right ad, and Wakko has been replaced by Johnny Thanksgiving denying that he did it. Yakko believes Johnny, while suddenly, it malfunctions. Yakko asks Johnny if he's okay, while the Russians look into the camera wondering if the US will allow the election of a robot. Another Russian said he's more human than the last guy, as they laugh.

Gallery covered due to the original number leading to more risqué content, click at your own discretion. The Animaniacs Wiki advises against trying to call these numbers.

The original version of the scene

The first revision, which removed all text from the scene

The second and final revision, with the phone number changed and all other text restored