The entire episode was animated by Wang Film Production

Beginning with this episode, the line "We've got wisecracks by the stacks" is replaced with "We pay tons of income tax." Additionally, the line "Meet Pinky and the Brain who want to rule the universe" is replaced with "Meet Ralph and Dr. Scratchansniff, say 'Hi' to Hello Nurse," since Pinky and the Brain had their own show on the WB at the time. The clips used to introduce the characters are from "Piano Rag," "Ups and Downs," and "De-Zanitized", respectively. 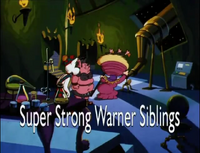 After finishing the shoot of their theme song, the Warners do a parody of Mighty Morphin' Power Rangers, a show that was also airing on Fox in the 1990s. 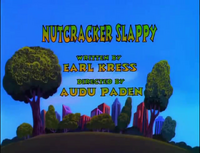 Charlton Woodchucks directs Slappy and Skippy in a ballet about cracking a nut, to the music of Tchaikovsky, against Slappy's wishes. 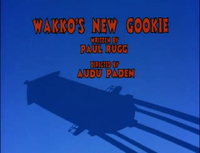 Since it is a new season, Wakko decides to try out a new gookie because he's tired of his old one. He tries it out on Yakko, Michaelangelo from "Hooked on a Ceiling", Bob Hope, Katharine Hepburn, and Larry King. All of them do not believe it really is a gookie, so Wakko decides if it ain't broke, don't fix it. The episode ends with Yakko trying to come up with a new catchphrase.

A Quake, a Quake! 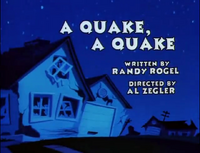 Music and Lyrics by Randy Rogel
Directed by Al Zegler

The Warners sing a song about the 1994 Northridge earthquake to the tune of Schumann's "Happy Farmer".

Retrieved from "https://animaniacs.fandom.com/wiki/Episode_70:_Super_Strong_Warner_Siblings/Nutcracker_Slappy/Wakko%27s_New_Gookie/A_Quake,_a_Quake!?oldid=29619"
Community content is available under CC-BY-SA unless otherwise noted.