Yakko, Wakko and Dot: Money down the drainy... 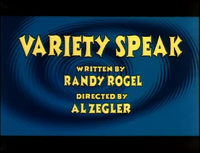 Music and Lyrics by Randy Rogel
Directed by Al Zegler

While waiting for Dr. Scratchansniff, Hello Nurse gives the Warners her copy of Variety Magazine, and Yakko and Dot teach Wakko all about the lingo used in the magazine.

Three Tenors and You're Out 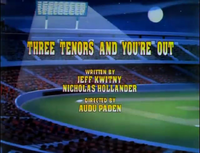 Slappy and Skippy are excited about seeing a baseball game at Dodgers Stadium, but what they get is a concert featuring a parody of the Three Tenors. 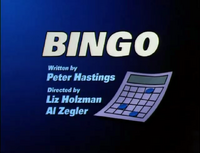 Dr. Scratchansniff holds a Bingo game, unfortunately, the only one in attendance is Wakko, who cannot seem to get around how to play.

The Three Tenors return to sing a shortened version of the Animaniacs theme, singing only the first chorus, a modified version of the second verse (Including a brief return appearance by Pinky and the Brain), and the final chorus.

No Peppy Songs With Lots Of Lyrics

Retrieved from "https://animaniacs.fandom.com/wiki/Episode_71:_Variety_Speak/Three_Tenors_and_You%27re_Out/Bingo/Finale?oldid=32970"
Community content is available under CC-BY-SA unless otherwise noted.