Every cartoon in this episode was animated by Wang Film Production 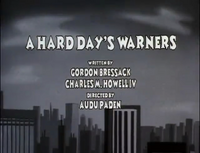 In this practically scene-for-scene parody of the Beatles' film A Hard Day's Night (the opening scene), the Warners try to avoid their running and screaming fans (one of whom is Elmyra) at a Comic-Con-like convention. Pinky and the Brain make a cameo appearance at the end.

Good Idea: Buying a pair of shoes on sale. 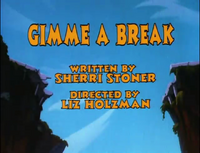 Slappy really wants to get some rest and relaxation, but Skippy insists they go to the mega awesome movie that is being shot. Every time she tries to relax, she somehow ends up on the set of the movie.

[Skippy pulls Slappy who is holding onto the tree, accidentally revealing the Warners taking a bath in the background. Dot screams.]
Wakko: Uh-oh, I think I feel a bubble coming on.
Slappy: Go away. 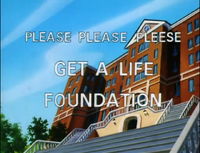 In a not-so-subtle jab at the fanboys who post every single goof and piece of trivia about the show on the Internet (GUILTY!), the Warners advertise about a rehabilitation center for those people.

Retrieved from "https://animaniacs.fandom.com/wiki/Episode_73:_A_Hard_Days_Warner/Gimme_a_Break/Please_Please_Please_Get_a_Life_Foundation?oldid=32544"
Community content is available under CC-BY-SA unless otherwise noted.