Every cartoon in this episode was animated by Wang Film Production

Yakko stars in a parody of the 1994 film The Lion King.

All The Words in the English Language: Part 1 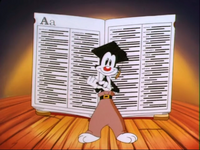 In this parody of/sequel to "Yakko's World", Yakko begins to sing all the words in the English language starting with the letter "A" while Dot and Dick Button (voicing himself) provide commentary as if it were an ice-skating routine.

The Kid in the Lid 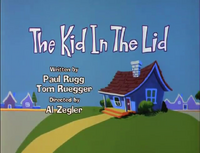 The Warners and Charlton Woodchucks star in a parody of The Cat in the Hat. Be sure to listen for the moment when they get away with saying "crotch".

All the Words in the English Language: Part 2

Yakko continues to sing all the L words. We briefly see an error made in the F's. Yakko begins to feel fatigued and slows down his singing.

Method to Her Madness 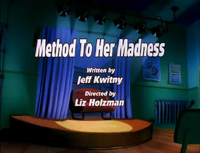 In the 1950s, Skippy, who talks like a beatnik, attends the New York Actor's Studio, which Slappy scoffs at.

All the Words in the English Language: Part 3

Yakko, who is more tired and singing slower than ever, is now at the Z's. When it looks like he will not be able to sing every single word, with his last ounce of energy, he sings it.

Join Yakko tomorrow when he will sing all numbers above 0!

Yakko: As long as you're not having tuna wiggle again.

Retrieved from "https://animaniacs.fandom.com/wiki/Episode_74:_The_Tiger_Prince/All_The_Words_in_the_English_Language/The_Kid_in_the_Lid/Method_to_Her_Madness?oldid=30295"
Community content is available under CC-BY-SA unless otherwise noted.