This is the only episode where all three of Tom Ruegger's sons provide their voices. Nathan, of course, voices Skippy; Luke voices the Flame; and Cody voices Little Blue Bird.

Every segment in this episode was animated by Wang Film Production

My Mother the Squirrel 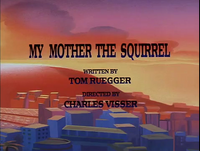 Little Blue Bird from the cartoon "Wild Blue Yonder" returns, only this time, he mistakes Slappy for his mother. 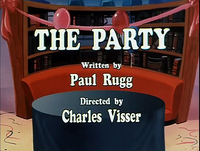 The Warners invite everyone they know for a fancy party, including Thaddeus Plotz, who is under the impression that Steven Spielberg will be there.

Oh! Say Can You See? 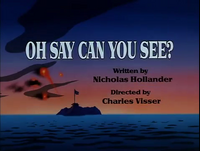 The Flame returns to witness Francis Scott Key write the poem "Defence of Fort McHenry," which would later better be known as the lyrics to the American national anthem, "The Star-Spangled Banner".

The Twelve Days of Christmas 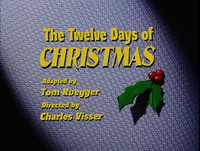 Little Blue Bird performs at the Hollywood Bowl with the Animaniacs orchestra to sing his own spin on the classic Christmas carol.

Our Version Of History

Is The Correct One

Retrieved from "https://animaniacs.fandom.com/wiki/Episode_79:_My_Mother_the_Squirrel/The_Party/Oh!_Say_Can_You_See/The_Twelve_Days_of_Christmas_Song?oldid=30017"
Community content is available under CC-BY-SA unless otherwise noted.