We hear the sound of a toilet flushing. As we pan down on the tower, a small door unscrews itself with water coming out of each hole. As the door opens, we see the Warners in scuba gear running out of the tower. 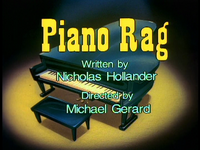 Dr. Scratchansniff, Ralph, and Hello Nurse are chasing the Warners. The Warners decided to hide in, and rudely disrupt, a piano recital.

Wakko: (to Tympannini) Hey, mister! Pull a rabbit of your pants!

"You can't catch us, we're the Warners three!"

"But where are the Warner Brothers?"

When Rita Mets Runt is the first episode of Rita and Runt. 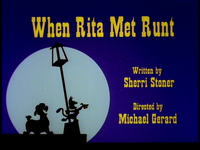 Rita, an independent and aloof cat, is given to the city pound by her owner, a woman who recently went through a break-up. Runt, a rather stupid dog, is also thrown in the pound by his owner, after belonging to a family and causing loads of trouble for them. The cat and dog are put in different cells next to each other. Since they can't see each other, they both think that the other one is the same species as them.

No one adopts Rita and Runt and they feel their luck begin to fade as they'd be put to sleep if no one wants them. Rita sings of the woes she suffered as a house cat, and how when she was a kitten she was adored and pampered, only to later be held in disregard as she grew older and got less cute. She is about to escape through a window when the thought of leaving Runt behind plays on her mind, especially when Runt wants her to come back. When Rita unlocks Runt’s cell, she horrifically realises that he is a dog, but Runt still thinks Rita is also a dog. When Rita mentions cats, Runt shows how he hates them by acting aggressively.

Runt carries Rita out the pound and down the dark street. Rita tries to make out that she'll eventually part ways with Runt when they find homes each, but the dog is ignorant to this and soon becomes too busy playing and running down the road, carrying his appalled new friend on his back.

The Warners get back up to the Water Tower using a barber chair. When Ralph pulls the lever, a sandbag falls out of nowhere. The Warners shrug and go back into the tower.

Retrieved from "https://animaniacs.fandom.com/wiki/Episode_7:_Piano_Rag/When_Rita_Met_Runt?oldid=37591"
Community content is available under CC-BY-SA unless otherwise noted.