The Animaniacs cast does a parody of the theme song from Rugrats. 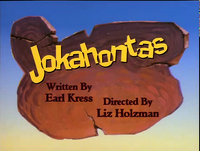 Animaniacs does a parody of the 1995 Disney film Pocahontas with Dot as Pocahontas (named Pocadotas),Yakko as Chief Powhatan (named Chief Yakkatan),and Wakko as Kocoum (named Wakkoum)

Boids on the Hood 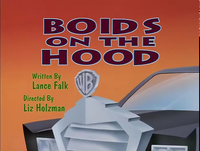 Mighty Wakko at the Bat 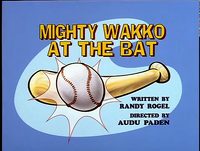 The Animaniacs cast star in a parody of the classic Ernest Thayer poem, Casey at the Bat, with a much more upbeat ending than the original.

Employee Of The Week

Yakko: Sure do! And our fans can burp along with you!

Retrieved from "https://animaniacs.fandom.com/wiki/Episode_85:_Jokahontas/Boids_on_the_Hood/Mighty_Wakko_at_the_Bat?oldid=32326"
Community content is available under CC-BY-SA unless otherwise noted.