"The Warner's Lot Song/The Big Candy Store/Bumbie's Mom" is the 8th episode of the original Animaniacs. It originally aired on September 22nd, 1993.

The Warners do a parody of the theme song to the 1960s television series, Gilligan's Island.

Colin tells about how Randy Beaman's mother once had a dream she was eating a giant marshmallow. 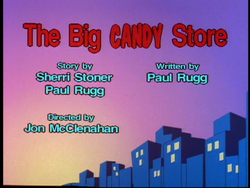 The Warners go to Flaxseed's Totality of Candy hoping to steal some candy, but the owner, Flaxseed, will clearly not allow this.

Colin returns with a melting ice cream cone to talk about how Randy Beaman's aunt reacted to whatever was licking her feet. As his ice cream melts, he draws a smiley face on it, which disappears. As he attempts to lick it, the ice cream drops to the ground. 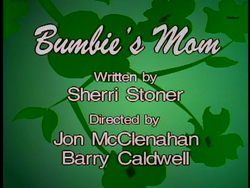 Slappy and Skippy are watching the film Bumbie the Dearest Deer. At a pivotal point in the film when the title character's mother gets shot and killed, Skippy is traumatized and begins to cry uncontrollably. To stop his crying, Slappy takes Skippy to New Mexico to meet Vina Walleen, the actress who played Bumbie's mom and long-time friend of Slappy's.

Hello Nurse: Would you like anything?
Slappy: Perhaps a sedative?
Hello Nurse: Huh? I don't get it.
Slappy: Go away.
Yakko and Wakko: Hello, nurse!
Slappy: That was pointless. (turns to Skippy) How you doin'?
Skippy: I feel air-sick. (burps and is about to barf)
Slappy: (to the camera) Dissolve to the next scene, quick!

The Warners get back up to the Water Tower using a catapult. When Ralph uses the catapult, he gets slammed to the ground. The Warners shrug and go back into the tower.