Message in a Bottle

The Warners are lost at sea and find a message in a bottle. 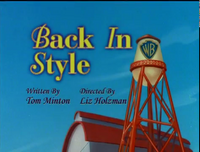 A documentary sequence showing what happened after Warner Bros. closed its animation department in the '60s. Apparently, they loaned out the Warners to some limited animation television cartoons.

Bones in the Body 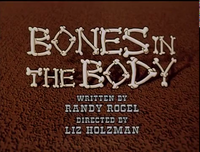 Music and lyrics by Randy Rogel
Directed by Liz Holzman

While at a campfire with Mr. Skullhead, the Warners sing their own variation of "Dem Bones."

When this episode is shown overseas, it has an additional gag credit:

We Don't Loan Out

Retrieved from "https://animaniacs.fandom.com/wiki/Episode_91:_Message_in_a_Bottle/Back_in_Style/Bones_in_the_Body?oldid=30987"
Community content is available under CC-BY-SA unless otherwise noted.