Animaniacs Wiki
Register
Don't have an account?
Sign In
Advertisement
in: Pages with inline Wikipedia links, Episodes, Season 5,
and 4 more

Animation by Wang Film Production (most of the main plotline), StarToons International, LLC. (There's Only One of You) and Koko Enterprises (Goodfeathers sequences)

The Warners finish a script for a movie named "Hooray for North Hollywood", and go to Thaddeus Plotz's office to pitch their new movie script. During an extensive waiting line, Yakko and Dot teach Wakko how to "schmooze". The Warners eventually meet with Plotz, and pitch their movie script, alongside a song. Plotz rejects their script, prompting the Warners to seek another producer to produce their script. After reading a Variety article, The Warners find out that a New Years' Eve party with important people of the movie industry is happening in Beverly Hills, prompting them to attend the party themselves in hopes to get their script produced.

At the beginning and end of the episode, the Goodfeathers bicker over sights in the sky. 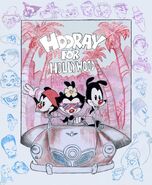 Poster by Bob Doucette for the scrapped film