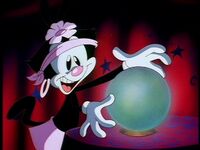 Dot does a quick Fortune Teller
thing as part of the song. 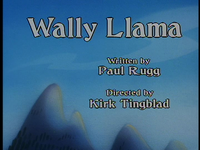 The Warners climb up the Himalayas to seek the all-knowing all-seeing Wally Llama and ask him a very important question, but the Llama is really tired and does not want to answer more questions. 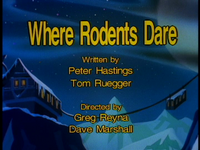 Pinky and the Brain go to Switzerland, where a United Nations convention is being held, in order to use Brain's freeze ray to freeze the guests solid and take over the world. Only problem is that the summit is atop a mountain summit, which Pinky and Brain must climb.

The Brain: Pinky, are you pondering what I'm pondering?
Pinky: I think so, Brain, but where will we find an open tattoo parlor at this time of night?

Retrieved from "https://animaniacs.fandom.com/wiki/Episode_9:_Wally_Llama/Where_Rodents_Dare?oldid=29539"
Community content is available under CC-BY-SA unless otherwise noted.