Here Comes Treble/That's Not the Issue/Future Brain/The Incredible Gnome in People's Mouths is the ninth episode of the Animaniacs reboot.

The Warners butt heads with a conductor and a talk show host. Brain is humbled by his future self. Marsha has a gnome in her mouth.[1]

In a recording session for the score for a movie with the Warners, they mess up on the music cues. The conductor is angry at the Warners for being surprised. The next scene contains multiplying Warners which escape from the screen and replace the orchestra. After the conductor sees the mess the Warners have made. Dot blows him with a cannon into the screen. Now the conductor takes the role of the Warners, and the Warners direct him and conduct the music.

That's Not the Issue

Wakko says that the issue is the lobby doesn’t have enough vending machines. Dot says the issue is that Tuck Buckerson has issues. Dot also says the issue is where she’s spending Christmas with Tuck. Tuck asks for a legitimate issue, and Wakko gives him a hunting magazine. Tuck explains he wants a topic of discussion. He asks what do the Warners feel about violence on children’s television shows. The Warners say they love it while an anvil falls on Tuck’s head. Tuck decides to end the show, while the Warners tamper with the words on the cue cards, much for Tuck's dismay.

Brain’s film is nominated for an Oscar, and Brain plans to rig the award ceremony by replacing the card with his film. While driving to the Oscars, Pinky is abducted by the future version of Brain. Future Brain uses a teleportation device to return to ACME labs, where he warns Brain to kill Pinky or else his plan will fail.

Brain refuses because he's known Pinky for years and trusts him. Brain uses the teleportation device to return to the oscars with Pinky. While at the Oscars, Pinky switches the envelope for Brain’s film, which turns out to be a cheesecake recipe. Future Brain says that Pinky foiled Brain, and he should’ve ditched him. Pinky manages to catch the teleportation device, but can’t tell the difference between both Brains. Pinky instead shoots at the wall, and accidentally teleports Future Brain into the past. Future Brain makes friends with a fish similar to Pinky, called Blinky. Meanwhile at ACME Labs, Brains plots his next scheme to take over the world. 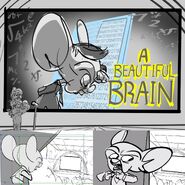 The Incredible Gnome in People's Mouths

This segment revolves around a man named Mike Benton, who searches for everlasting life. Mike does an experiment on himself, only to malfunction, and make him a Gnome. The Gnome houses in people’s mouths, to speak for them when they can’t speak for themselves. A woman named Marsha goes on a date with a man named Shaun, who claims he’s in love with Marsha. The Gnome comes out of Marsha’s mouth saying that Shaun only wants her for money. Marsha says she’s willing to pay for the meals, and she loves him too. Shaun and Marsha decide to get married, and at the wedding, the gnome reappears. The gnome says Shaun only wants her for her pinball machine collection. Shaun admits it, so Marsha drives away in control of the gnome. The gnome leaves Marsha’s mouth to go wherever he’s needed next.