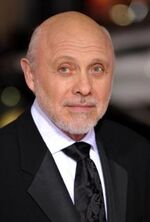 Hector Elizondo was born in New York and raised on the Upper West Side of Manhattan. Elizondo, the name is Basque and means "at the foot of the church". His lifestyle in his pre-acting days was as diverse as the roles he plays today. He was a conga player with a Latin band, a classical guitarist and singer, a weightlifting coach, a ballet dancer and a manager of a bodybuilding gym. In his teens, he played basketball and baseball and was scouted by the New York Giants and Pittsburgh Pirates farm teams. After a knee injury ended his dance career, he switched to drama. Since then, he has frequently appeared on Broadway, most notably with George C. Scott in Arthur Penn's production of "Sly Fox" for which he received a Drama Desk nomination and for his role as "God" in "Steambath", which won him an Obie Award.

Retrieved from "https://animaniacs.fandom.com/wiki/Hector_Elizondo?oldid=22164"
Community content is available under CC-BY-SA unless otherwise noted.