Animaniacs Wiki
Register
Don't have an account?
Sign In
Advertisement
in: Pages with inline Wikipedia links, Characters, Humans,
and 6 more

"Newsreel of the Stars"

If you are looking for the song, sung by Wakko and Yakko Warner, go here.

Heloise Nerz[1], better known as Hello Nurse is the buxom studio medic, over whom Yakko and Wakko continually fawn. Her voice actress is Tress MacNeille who also voices Dot.

Hello Nurse's apparel consists of a small white nurse's cap and a white form-fitting dress, alongside white high heels with ribbons. She has long blonde hair and big blue eyes. She wears violet eyeshadow and red lipstick. Hello Nurse's appearance almost always prompts Wakko and Yakko into exclaiming "Hellooooooo, Nurse!" (one of the show's well-known lines) and jumping into her arms. They will also call out her name if they see a beautiful woman as shown in several episodes (they did call out to an overweight woman once in "Hello Nice Warners" although it was instead "HellOOO, Large NURSE!"). Dot does likewise when an attractive man enters the picture. (Dot usually says "Hellooooo, Nurse!" or as seen in Jokahontas, "Hellooooo, Mel!")

Hello Nurse is considered by Yakko and Wakko to be hot, loyal and intelligent. Aside from her beauty, Hello Nurse is supposedly an outright genius; in the song about her it states several of her rather prestigious accomplishments (although parts of it may be not true, since the Warners were hit by lightning after they stated they would be if they were lying). She stated in Wakko's Wish that she has a "mean IQ of 192". In later characterizations, she thinks that she is respected only for her looks outside of her mind. However, in a song about her, both Wakko and Yakko seem to show that they greatly respect her for her mind, but also love her for her looks quite a lot too. She, like everybody else, sometimes finds the Warners annoying, but mostly recognizes them as absolutely cute kids. In the comics, Hello Nurse was also a secret agent. 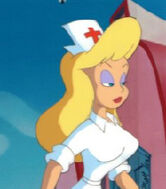 Hello Nurse on the phone

Volunteering at the Zoo 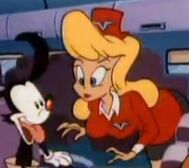 At the Detective Agency'