Animaniacs Wiki
Register
Don't have an account?
Sign In
Advertisement
in: Pages with inline Wikipedia links, Characters, Animaniacs,
and 7 more

For the segments, see here.

I'm not overreacting, I'm a teenager!

Katie Ka-Boom is a innocent 16-year-old girl who greatly overreacts to trivially upsetting situations and literally turns into a flaming monster before subsequently exploding, usually leaving the family home in ruins. She's voiced by Laura Mooney.

Being a typical teenage girl, Katie is very overreactive, ill-tempered, and emotionally difficult. When she‘s her normal self, she is actually a lovely, innocent, and nice girl. Though when she goes "Ka-Boom" (hence her last name), she turns into any destructive monster, literally.

In human form, Katie is a tall, teenaged female. She appears to be 16 years old and has a blonde bob hairstyle. She has a pastel blue sweater that shows her shoulders, violet jeggings and blue flats. She also wears red lipstick.

In one cartoon, she wears a red top that exposes her stomach.

Before she changes into a monster, her eyes glow bright white, her voice gets very deep and she grows. In monster form, she seems to be able to change into many forms. As one monster, she looks like a green monster and her clothes are ragged, but she has also been seen as a fiery monster. More often than not, the transformation is related to the upsetting situation, such as a giant telephone monster when she loses a call, a Big Daddy Roth-esque hot rod monster during a driving lesson, and a monster in a dress for when arguing about Katie's curfew for staying out late during prom night, the one time her parents stood up to her. However, after she explodes, she’s fine and her clothes are unaffected while the surrounding environment is completely ruined. In one cartoon, the monster's stomach became a yellow hypnotize.

Katie doesn't seem to be aware of her exploding and turning into a monster after she has blown up, but she might just not come on it. During her shift, she will deny her family's statements that she‘s a monster, saying "I'm not overreacting, I'm a teenager!". She may have her shift under control in the revival, however, as she quickly turned into her monster form to chase after Chicken Boo after he captured her along with the rest of the Animaniacs cast. 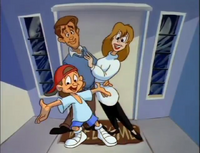 Katie Ka-Boom and her family in Wakko's Wish

Katie and the other Animaniacs cast in the revival 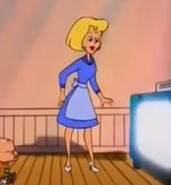 A Katie Ka-Boom lookalike in The Sylvester and Tweety Mysteries 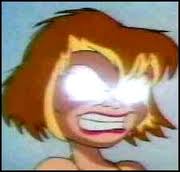 While being angry, Katie's eyes are changing.

"I'm not changing my clothes!"