"Bones in the Body"

"We Won't Ever Leave"

"Macadamia Nut" is a song from the Animaniacs segment "Dot - The Macadamia Nut." The cartoon is a parody of the "Macarena" music video starring Dot and the entire Animaniacs cast in backup. The parody lyrics were written by Tom Ruegger, and the cartoon was animated by Startoons.

Unlike most song parodies on the show, this one uses the actual music from the song, with only minor alterations. This is due to the fact that at the height of its popularity, Warner Bros. Records purchased the publishing rights to the song.

As of 2021, the song has recently had a popularity resurgence due to its increased usage on the music app TikTok.

Yakko Warner and Wakko Warner:
Hello, Nurse!
Yakko:
Uh...
Dot Warner:
I am not trying to be annoying!
Yakko and Wakko:
AI!

Dot:
I act like a nut, so they call me Macadamia
I dance like a klutz on a show called Animania
Am I a cutie? Absolutie!
And a beauty, you can bet your patootie

Dot, Minerva and Hello Nurse:
But if you touch me, or even get near me
I'll have you arrested
Do you hear me?

Yakko and Wakko:
Dot is a nut, so they call her Macadamia
She's cracked in the head and kooky in the brain-ia
Each line in this song sounds pretty much the same-ia
Oy, Macadamia!
Ralph:
Duh!

Dot:
Now please don't mention my brother
The one they call Wakkorino!
[Wakko belches again]
He's always burping every hour
So I threw him out of the tower
Now, come on! What did you want me to do? He was grossing me out! And I'm just a cute little thing. So, don't cross me!

Yakko and Wakko:
She's cracked like a nut, so they call her Macadamia
Whenever she gets mad, you'll experience pain-ia
Cuts and bruises you will sustain-ia,
Oy, Macadamia!
Pinky:
Narf!

Yakko and Wakko:
Lava tus manos, por favor, Macadamia
The world is the goal for Pinky and the Brainia
Dot:
Otra vez on y vas the repetitive refrainia...
Yakko and Wakko:
Oy, Macadamia!
The Brain:
Yes!
Dot:
Don't hate me because I'm cute!

Slappy Squirrel:
I don't get it, what's the joke?

Dot:
I'm a nut who's known as Macadamia
But you can call me by my other name-ia
Dot, Hello Nurse and Minerva
Louisa Francesa Banana Fana Bo Besca
Dot
Or just plain "Dot", the name I flirt to
But if you call me "Dottie," I'll have to hurt you 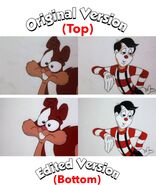 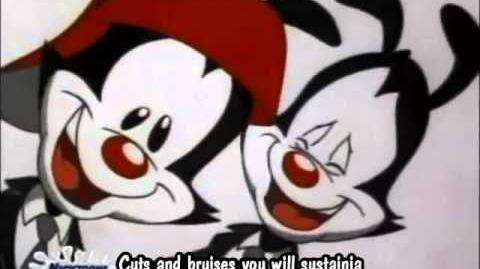