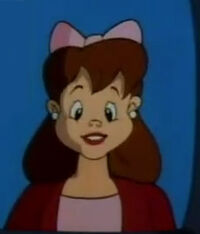 Mary Hartless is a recurring character on Animaniacs. She serves as an entertainment news reporter for an unnamed program. She is a clear parody of Mary Hart from Entertainment Tonight.

Mary Hartless originated as a character on Tiny Toon Adventures in the episode "Thirteensomething" where one of the stories she reported on was "My voice causes seizures!"

She was voiced by Valri Bromfeld on Tiny Toon Adventures and in her first four Animaniacs appearances, then was subsequently played by Tress MacNeille.

Retrieved from "https://animaniacs.fandom.com/wiki/Mary_Hartless?oldid=28189"
Community content is available under CC-BY-SA unless otherwise noted.