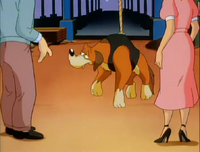 Mindy's Father is a character who is seen in Buttons Mindy segments who like the mother,his face is never seen. Mindy calls him "Mr. Man" like she calls her mother "Lady".

He is seen in

A Gift Of Gold,

He dosen't have as many episode appearances as Mindy's Mom

His voice actor is Frank Welker.

Retrieved from "https://animaniacs.fandom.com/wiki/Mindy%27s_Father?oldid=24609"
Community content is available under CC-BY-SA unless otherwise noted.