Mindy's Mom is often seen at the beginning and end of the Buttons and Mindy tying the latter to her harness and scolding the former at the end for things he did not do (which she does not know). Mindy often calls her "Lady", to her annoyance. Like characters such as Mammy Two-Shoes from Tom & Jerry, Miss Nanny from Muppet Babies, and Baby Herman's mother in Who Framed Roger Rabbit and its spin-off shorts, she is always seen from the neck down. However, at the end of Wakko's Wish, where she takes on the role of Snow White, we finally get to see her hair, which is brown, the same color as her voice actress, Tress MacNeille. Also in Wakko's Wish, Mindy finally calls her "Mom." Like Hello Nurse, she doesn't have a real name; she is known as "Lady" because Mindy refers to her as such. She is voiced by Tress MacNeille. 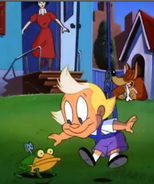 Only Head Shot of mother.
Too far
Retrieved from "https://animaniacs.fandom.com/wiki/Mindy%27s_Mom?oldid=41787"
Community content is available under CC-BY-SA unless otherwise noted.