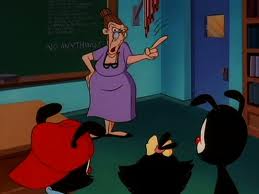 Miss Flamiel made her first appearance in the cartoon Chalkboard Bungle. She is a very strict teacher that doesn't tolerate anything and writes an "F" on people's foreheads with a red magic marker (black in Wakko's case) whenever someone doesn't follow the school rules or does something incorrect (including improper grammar). In her first appearance, she is hired by Plotz to discipline and educate Yakko Warner, Wakko Warner, and Dot Warner. Although he was reluctant she could handle them, she was extremely confident in her skills. She stated that there was no child she couldn't control, except for Buddy Hackett but brushed it off as genetics. However, the Warners were able to deal with her. In the end, the Warners, disguised as Miss Flamiel, had the real her sealed in a crate and got Ralph, who thought the Warners were inside the crate, to lock her inside the water tower. Despite all that, Miss Flamiel continued to be the Warners' teacher as shown in other cartoons, only this time she seems to be less strict and the Warners being more cooperative. Miss Flamiel is one of the antagonists of the show. She doesn't like recess.

She is voiced by Tress MacNeille.

Among the school rules, wearing shoes and shirts is forbidden, but ironically, Miss Flamiel is wearing a dress and shoes and Wakko is still wearing his shirt.

Retrieved from "https://animaniacs.fandom.com/wiki/Miss_Flamiel?oldid=34048"
Community content is available under CC-BY-SA unless otherwise noted.