Newt is a professinal hunting dachshund who appeared in the first Minerva Mink cartoon Meet Minerva. He also appears in a non-speaking role as Schnappsie, the Nazi guarddog in "Puttin' on the Blitz". He is voiced by the late Arte Johnson, who is best known for his time on Laugh-In, where he plays a German soldier who says, "Very interesting." and was a panelist on the Peter Marshall version of Hollywood Squares.

Newt is a grey fur dachshund with long floppy black ears and a red nose. 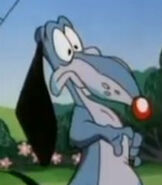 Add a photo to this gallery
Retrieved from "https://animaniacs.fandom.com/wiki/Newt?oldid=42119"
Community content is available under CC-BY-SA unless otherwise noted.