Yakko, Wakko, and Dot
Pinky and the Brain

"Oh that's right, you're from the 90s"
— Norita on the return of Yakko, Wakko, and Dot to the studio

Nora Rita Norita is the CEO of Warner Bros. in the 2020 reboot, replacing Thaddeus Plotz; and the mother of Cora Norita. At one point Nora's family's company, Mucho Telèfono, became the parent company of Warner Bros.

She is voiced by Stephanie Escajeda.

Nora is a tall, slender Latina woman with brown hair, green eyes, a pointy nose, large, purple-framed glasses, gold earrings, a black choker, a pastel yellow collared shirt, a dark blue suit, sheer tights and black high-heeled knee boots. She wears red lipstick and has a beauty mark on the left side of her face.

Like her predecessor Mr. Plotz, Nora is serious and stern. She is also somewhat selfish, as she believes in "pulling up the ladder behind her" after Dot mentions succeeding her. She is very concerned about being in shape, as she walks on a treadmill in her debut appearance, often exercises while making business calls, and goes into a laughing fit when the Warners accuse her of eating Wakko's donuts in "WhoDonut", even ripping some of her own hair out.

Nora is shown to be somewhat condescending, as she scorns the Warners when they first meet snidely commenting on how their ignorance of drones, tablets and the like is because of them being from the 1990s. Despite that, most of the time, she seems to take a more passive approach than Plotz and ignore the Warners' antics, and usually shoos them away. She's even scared the Warners with her aforementioned hysterical fit.

Like Plotz, she is short-tempered, best shown in "23 and WB" where her rage causes her to throw people out of her window and into a prop casket.

Nora explaining to the Warners what a tablet is 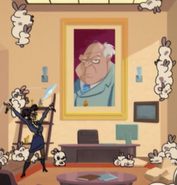 Portrait of Thaddeus Plotz in her office