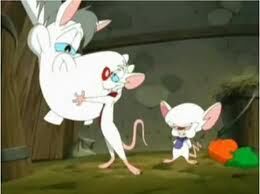 Phar Fignewton (voiced by Rob Paulsen and Frank Welker) is a horse that has the same amount of intelligence as Pinky, who is also her boyfriend. She first appeared in the Episode "Jockey for Position" and also made an appearance in the movie Wakko's Wish. Pharfignewton was also mentioned in the spin off to "Animaniacs" "Pinky and the Brain".

Retrieved from "https://animaniacs.fandom.com/wiki/Phar_Fignewton?oldid=38678"
Community content is available under CC-BY-SA unless otherwise noted.