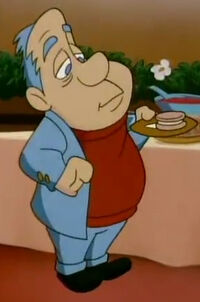 Pip (AKA his real full name, Francis Pumphandle) is a minor character in Animaniacs.

His voice actor is Ben Stein.

He appears in "Chairman of the Bored", and bores the Warners with his long, one-sided conversation. He later appeared in Wakko's Wish as the Good Fairy/Desire Fulfillment Facilitator who appeared to Wakko after the middle Warner sibling choose the right wishing star in his song. If one were to shake hands with him, he would ramble on, and no matter what the character tried (be it pulling or using a crowbar) he or she would not be able to let go of Pip's hand, no matter what a person did, they would never be able to stop him talking, much less get rid of him: they would have to wait for him to finish, and when he did finish for the Warners, they realized they missed his constant talking. He has made cameo appearances in episodes including "Dot, the Macadamia Nut" and "The Big Wrap Party Tonight"

Pip (being a parody of his voice actor) is comically boring and overly talkative. Pip is still friendly and doesn't seem to mean any harm so the Warner's never want to tell him to buzz off, putting them in a complicated situation when he rambles on with one of his stories.

In the episode, Chairman of the Bored, and usually everywhere else you see him, he has a red shirt, blue jacket, and blue pants, but in Wakko's Wish, he is dressed like a fairy.

Retrieved from "https://animaniacs.fandom.com/wiki/Pip?oldid=34939"
Community content is available under CC-BY-SA unless otherwise noted.