Skippy Squirrel is Slappy's sweet, cheerful, and adorable nephew and often serves as the voice of reason between the two. They often have different points of views, with Skippy thinking of the safety of his aunt. However, despite his cuteness and sweetness, he has multiple moments (especially in the comics) where he adopts his aunt's violent nature. According to the episode "One Flew Over The Cuckoo Clock," Skippy's teacher's name is Mrs. Munk. In the episode "Bully for Skippy", Skippy deals with a bully at school, thanks to his guidance counselor Ms. Butley. Also, in some episodes, Skippy is often prone to crying, as shown in the episodes "... And Justice For Slappy" (When Slappy yelled at Skippy for no reason, which Walter John Wolf made up), "Bumbie's Mom" (whenever he sees a sad movie), and "Soccer Coach Slappy" (whenever he gets hit in the face with a beach ball or have his beach balls sitpopped by Wakko).

There are contradicting beliefs on why Skippy's parents were never shown or referenced. Sherri Stoner, in character as Slappy, said in the Nostalgia Critic Tribute that Skippy's parents were on a trip, occasionally sending pay-checks. However, in the episode "One Flew Over The Cuckoo Clock", when Slappy is temporary unable to look after him, He has lived in a foster home, showing that he had no parents to be sent to. 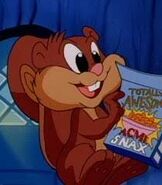 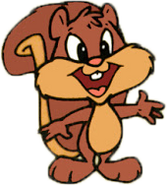 Retrieved from "https://animaniacs.fandom.com/wiki/Skippy_Squirrel?oldid=34139"
Community content is available under CC-BY-SA unless otherwise noted.