Today, she lives in a treehouse with her nephew, Skippy Squirrel. She often faces old enemies from her past, like Walter Wolf, Sid the Squid and Beanie the Brain Dead Bison. Other situations see her facing common nuisances, like annoyingly perky neighbors like Candie Chipmunk ("I Got Yer Can") and Skippy's emotional traumas ("Bumbie's Mom"). She typically solves her problems with exaggerated cartoon violence. She has even blasted the Warners' annoying new nanny out of Warner Bros. Studio when the Warners could not do it themselves because of their moral beliefs ("The Sound Of Warners"). One of her theme songs is an excerpt from Antonín Dvořák's "Humoresque".

She is characterized as a grouchy, bitter, cranky, elderly anthropomorphic gray squirrel with a thick New York accent. While she's more mean-spirited than The Brain, She’s usually seen usually wearing a green hat decorated with a drooping yellow flower, purple eyeliner on her eyelids and carrying a pink purse and green umbrella that she occasionally uses to hit other characters. "Hurray For Slappy" reveals Slappy to be in her 80s, as Mary Heartless (a parody of Entertainment Tonight's Mary Hart) refers to Slappy as "octogenarian". She lives in a hollow tree with her nephew Skippy, her polar opposite in terms of personality, who loves to hear her tell stories about her former days of stardom. In the episode "My Mother The Squirrel", while Skippy represents a cuter style of cartoon characters, Slappy was and is a more chaotic and old-school character, enjoying violence for comedy's sake and resentful of milquetoast, censor-influenced modern cartoons. She was first seen in the show's third episode, "Slappy Goes Walnuts", originally aired on September 15, 1993, which also introduced an extract of a purely fictitious Looney Tunes cartoon featuring herself and suggesting that she was a retired Looney Tunes character who crossed over into Animaniacs. In several episodes, there are shots of fictitious Looney Tunes cartoons portraying a younger Slappy, under the pseudonym Slappy the Slap-Happy Squirrel, a reference to the MGM cartoon character Screwy Squirrel.

Her former co-star and arch-enemy, Walter Wolf harbors a grudge against her, both for defeating him repeatedly (and violently) in the past and for becoming a big star, albeit now a faded one. He has also enlisted the help of her other ex-nemeses, including Sid the Squid and Beanie the Brain-Dead Bison. Much like Slappy, all these characters show signs of age and senility. In addition to Walter's occasional attempts at revenge, Slappy must sometimes endure more mundane annoyances such as a cloyingly-perky new neighbor or Skippy's emotional traumas, for instance after he watches the animated movie Bumbie (a parody of Bambi). Slappy solves this by taking Skippy to see the actress in question. In a later episode, "No Face Like Home", Slappy had been combining her disdain for new slapstick-free cartoons as well as her dislike for cartoons that resolved issues peacefully, and "pretty female animals who had no slapstick". Slappy also succumbs to Hollywood's craze with plastic surgery by attempting to have herself transformed artificially back into her youthful self and get back into cartoons "to make them the way they should be, with anvils and dynamite!" Slappy is also well known for the dialog "Who's on Stage?", a 2 minute Vaudevillesque wit-round routine, based on the legendary sketch "Who's on First?", in Episode 59 ("Woodstock"), in which she tries to determine which band is performing on stage ("The Band", "Who" or "Yes") which of course ends with Roger Daltrey inviting the pair on stage.

Slappy easily outsmarts whatever foes she faces (who are almost universally dimwitted as well as decrepit) and exacts revenge with exaggerated cartoon violence, usually while reminiscing about her "classic" (but fictional) film appearances of her youth. She often will remark how her enemies remind her of various famous cartoon characters when they were very young. Her catchphrase "Now that’s comedy!" is usually delivered after visiting physical injury and humiliation upon her opponents. She also occasionally says, "You remind me of a very young (insert name)," to everyone from the Warner siblings to her enemies. Slappy often pokes fun at her own age and ailing health.

An incomplete filmography of Slappy's Looney Tunes cartoons can be pieced together from mentions in the show.

The following are shorts Slappy starred in with Suzy Squirrel, as shown in The Sunshine Squirrels:

Slappy was created as a joke by writer and voice actress Sherri Stoner. Stoner had a history of playing troubled teenagers in TV movies during her early career. Friend and writer John McCann joked that she would be playing troubled teenagers until she was 50. This caused Stoner to invent Slappy's vocals, thus getting approval from the production crew and being part of the cast.

One of Slappy's recurring bits is comparing someone to a famous cartoon character she worked with earlier in her career. 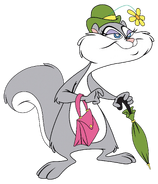 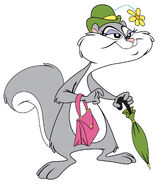 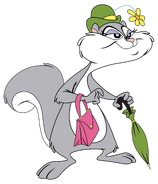 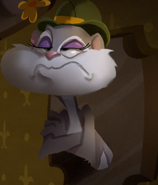 Slappy and the others in the 2020 series

The article’s ovah, go away!
Community content is available under CC-BY-SA unless otherwise noted.
Advertisement