The Animaniacs Theme is, as its title suggests, the song that opens every episode of Animaniacs (with the exception of episode 65). The song describes the set-up of the Yakko, Wakko, and Dot's madcap adventures and also introduces several of the other major characters on the show.

The theme was composed by Richard Stone and the lyrics by creator Tom Ruegger. The main title was directed by Rich Arons and animated by Tokyo Movie Shinsha.

The theme has been translated in twenty-one languages. (And partially in Freakazoid in Norwergian)

The Warners:
It's time for Animaniacs!
And we're zany to the max!
So just sit back and relax.
You'll laugh 'til you collapse.
We're Animaniacs!

Dot:
And the Warner Sister, Dot!

The Warners:
Just for fun we run
Around the Warner movie lot.
They lock us in the tower
Whenever we get caught.
But we break loose
And then vamoose
And now you know the plot.

Meet Pinky and the Brain
Who want to rule the universe. (Seasons 1-2)
Meet Ralph and Dr. Scratchansniff,
Say hi to Hello Nurse. (Seasons 3-5)
Goodfeathers flock together,
Slappy whacks them with her purse.
Buttons chases Mindy,
While Rita sings a verse.
The writers flipped,
We have no script.
Why bother to rehearse?

All:
We're Animaniacs!
We have pay-or-play contracts!
We're zany to the max!
There's baloney in our slacks!
We're Animani-
Totally insane-y...
[variable line; see the following section]
An-i-man-i-acs!!!!
Those are the facts.

This line is the third to last line in the theme song. It is always different depending on the show number. They are in the order that they first appeared on the show. In season 2, the variable verse in all the episodes was "here's the show's name-y".

In the story "The Contest", Yakko and Dot sing the last part of theme song. The Variable Verses are:

The three people in the "xylophone" line next to Bob Hope appear to be the Three Stooges: Larry Fine, Curly Howard, and Moe Howard. (Look for Moe's hair as the giveaway).

Meet Pinky and the Brain
Who want to rule the universe.
There's Skippy and there's Slappy
And say hi to Hello Nurse.

"Animaniacs" is translated into other languages as follows: 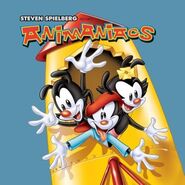 Yakko, Wakko and Dot in the logo

Pinky and the Brainy

Add a photo to this gallery
Retrieved from "https://animaniacs.fandom.com/wiki/Theme_Song?oldid=34901"
Community content is available under CC-BY-SA unless otherwise noted.