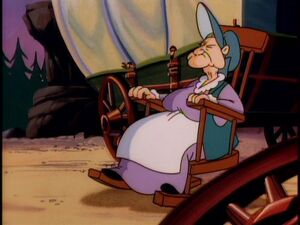 The World's Oldest Woman is a minor character voiced by Tress MacNeille. She first appeared, without a name, in the Chicken Boo segment "Davey Omelette", and later reappeared in the Slappy Squirrel segment "The Christmas Tree". However, she is more prominently known as one of the hosts of Histeria!, where she was given her name.

Retrieved from "https://animaniacs.fandom.com/wiki/World%27s_Oldest_Woman?oldid=21629"
Community content is available under CC-BY-SA unless otherwise noted.